Have shopkeepers decided to take a “can’t beat them so we might as well join them” attitude against graffiti artists? (And I’m sorry for misusing the word artists in this case, because let’s face it, the work of the majority of graffitists is usually anything but artistic). 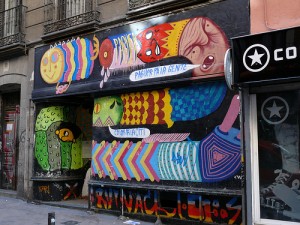 Shopkeepers in Madrid have begun to recruit people to paint graffiti on the steel shutters that protect their stores in a bid to prevent them from being defaced by crude scribbling that are usually far more obscene and offensive.

The shutters of over a hundred stores have been painted by artists from across Europe in the Madrid neighbourhood of Malasana, the centre of the city’s countercultural scene. You have to agree looking at the example to the right, they are a damn sight more attractive than what would be the alternative.

The thinking is that seeing as painting over the top of another artist’s graffiti is regarded as a huge insult, graffiti artists are inclined to leave the shutters alone. At the very least it has given the shopkeepers the choice of how they would like their shutters decorated and in some cases the results have been far more attractive than the alternative.

In some cases the graffiti that has voluntarily been added to the shutters have reflected the shop’s activity but this is an exception rather than the norm. It seems that the majority of the people who have seen the graffiti have applauded the move and this, so far anyway, includes the graffitists who have left the new artwork alone.

This entry was posted in Graffiti and tagged combating graffiti, graffiti. Bookmark the permalink.