The US FDA has just recently approved a machine that is known as the Artas System to be used commercially for the process of returning life to hair follicles. In an unusual twist to the chances of getting your hair back, though, it will only assist men who have (or used to have) brown or black hair.

When the Artas System, which comprises an image-guided robotic arm, imaging technologies and small dermal punches, is positioned over the scalp it is capable of identifying and harvesting follicular units. These units can be stored until implantation proceeds using manual techniques. The harvesting rates are increased and the process is quicker and less invasive than techniques that have previously been in use. 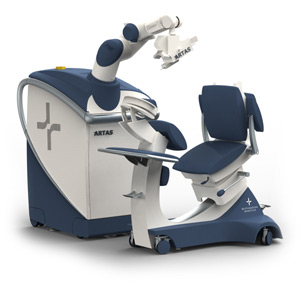 With many different reasons why hair loss in men occurs, the most common is hereditary androgenic alopecia which is more commonly referred to as “male pattern baldness”. This is generally inherited from either or both sides of the family.

What happens is the hair in the areas that are balding is going through a process where the shaft diameter of the hair shrinks until it eventually disappears. The hair in areas where balding does not occur remains the same and is considered to be permanent hair. Hair transplantation can take place by taking follicular unit grafts from the healthy, permanent hair region and meticulously grafting it into the bald scalp area.

This new Artas System has been designed and manufactured by Restoration Robotics after development in partnership with several leading hair surgeons and it appears to be a means of speeding the process up and of maximising the effectiveness of the process. The result is the possibility of removing any signs of baldness before it begins to become noticeable.