Deciding On A Hydration Belt

I have been running for many years now and have completed my share of marathons but I have never really gotten into the whole “carry your own drink bottle” thing. That being said, I did actually once buy a water bottle and holder that could be strapped around my waist, but it definitely wasn’t designed for running and, consequently, it was forever jiggling about at the small of my back and would slowly make its way from the middle of my back to one side or the other. I wore it a few times but felt it was more trouble than it was worth and so I have contented myself with stopping for a drink at a local park, service station or a tap from a front yard. Not ideal.

So I’ve decided it is time to update myself into the 21st century and buy a hydration belt. I’ve already started to look at the various types – that’s how I know that they’re called “hydration belts”. They’re actually a little more advanced than belts capable of carrying water or whatever fluid you’re drinking. With pockets and hidden compartments they are complete fuel supplies, communications and music holders. They’re pretty swish and they look as though they will provide the type of service that I will need.

There were three types of hydration belts that caught my eye when I started looking. Mainly, they caught my eye because they came up as the most popular with customers on the Amazon site. I was looking for belts that contain 4 water bottles and the three that were at the top were the Amphipod RunLite 4 Hydration Belt, the Nathan Speed 4R Waist Pack and the FuelBelt Helium 4 Bottle Belt.

All three of these belts come with 4 x 8oz bottles and they all look as though they would not weight very much and would sit nicely around the waist.

In reading the reviews it quickly became clear that there were some small but crucial differences between the three different types of fuel belts. The first came down to the positioning of the bottles, the second came down to the ability of the belt to remain sitting in the spot where it was first attached and the last came down to the amount of storage other than the bottle holders that each provided.

Now, I’m not going to go into a gigantic explanation of all of the pros and cons of each of the hydration belts that I looked at because they largely come down to a matter of personal preference. Just because I didn’t like the amount of storage space in one type of belt may be completely inconsequential to the next person. 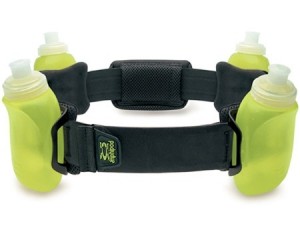 What I will tell you is that I have chosen (and ordered) the Amphipod Hydration Pack and when it comes and I have had a chance to take it out for a test run, I can report back on exactly how it feels. The main contributing factor for me in choosing the Amphipod was the fact that the bottle holders could be moved around to any point on the belt and they can even be placed so that the bottles are held horizontally as well as vertically. This means there should be no chance that the bottles or the holders will impede my swinging arms while I’m running.

This entry was posted in Running. Bookmark the permalink.