There are many different types of items that were commonly used years ago that are not seen quite so much any more. Apart from making terrific collector items, something like a sterling silver napkin ring is probably not going to demand a lot of attention. They are wonderful looking objects and the engraving that is done on some of them makes them well worthwhile tracking down.

High quality sterling silver napkin rings were a symbol of wealth with families in the upper classes possessing sets of them. The more elaborately decorated they were the greater the impression they made on the guests who used them.

If you were going to try to turn a dinner party into something more formal it may be worth your while to get some antique sterling silver napkin rings. Not only will they look tremendous when the table has been set but they are the types of things that will hold their value for years to come, making them items that can be passed down from one generation to the next.

I have had a bit of a look around to see if there were any types of silver napkin rings worth looking at and found some particularly attractive ones that are definitely worth showing here. 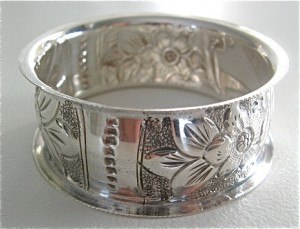 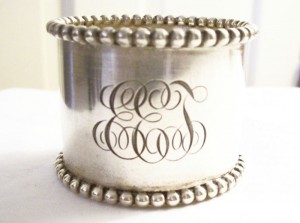 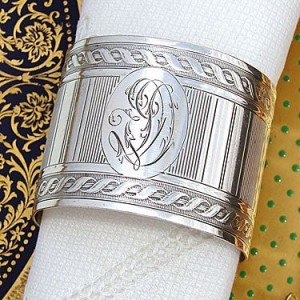 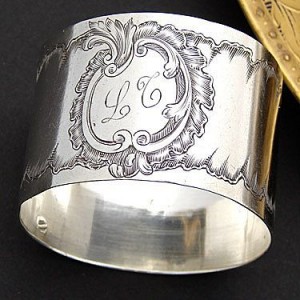 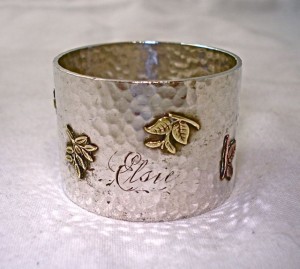 One of the features with using silver napkin rings is that they were often engraved with the name of the person whose place was set with that particular napkin ring. Personalized napkin rings were very common and so, when you look at many of the napkin rings that are available for sale today among the various auctions it will be very common to find them with either a person’s name or a set of initials.

These elaborately engraved silver napkin rings are some of the most prized types that can be found for both their decorative value but also the historical significance that they might hold.

Although they can look absolutely stunning when they have been worked with a lot of fine borders and scrollwork, some of the most stunning types of napkin rings are quite plain looking. Features such as a subtle wave along the borders or an unusual shape can provide all of the special interest they need.

Napkin rings were made by many silversmiths during the Victorian era. During the time of the mid-1800s, the use of silver became far more widespread thanks to the discovery of significant sources of the metal. The technology had improved to the point where working the metal was for more effective too.

The results can be seen in the silver products that were produced during these years with silver companies such as Meriden, Gorham, Wallace, Reed & Barton and the like.

The use of napkin rings during the Victorian era was a must and no well dressed table would be without a set. The use of individual napkins at the table was a relatively new concept and the use of a decorative napkin ring to hold each napkin was a great way to dress the table.

A popular type of napkin ring that became very common at the time was the figural napkin ring. These were highly decorative types of napkin rings that featured characters either posing beside the ring or holding it aloft in some way. They were most commonly used by children and this becomes obvious when you notice that the majority of figural napkin rings either feature animals or young children at play. They were a great way of identifying a child’s place at the table and also made it a little more interesting than the plain napkin rings that an adult might use. They can be found in an astounding array of imaginative poses and settings.

There are many exquisite examples of figural napkin rings coming from the Victorian era. The following is just a small selection to enjoy. 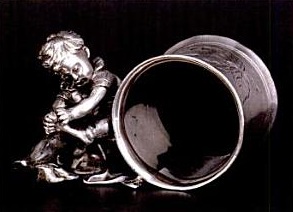 This is a silver-plated napkin ring made by
Derby Silver Co., c1875 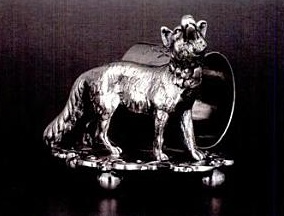 This is a silver-plated napkin ring featuring a wolf made by
Barbour Silver Co., c1870 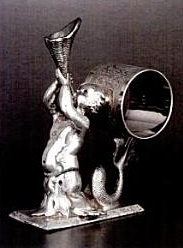 This is a silver-plated napkin ring made by
Rogers, Simth & Co., c1875 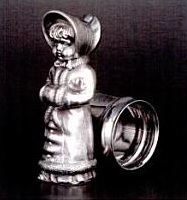 This is a silver-plated napkin ring made by
Meriden B. Co., c1875

As you can see from the brief selection of figural napkin rings displayed above it is easy to become enchanted by such a superb array of napkin rings. These are more than simple accompaniments to be placed on the dining table, they are decorative items and a vital part of history as well.

If you were going to start out putting together a collection of silver napkin rings you would be very tempted to try to track down a few silver figural napkin rings from the Victorian era.